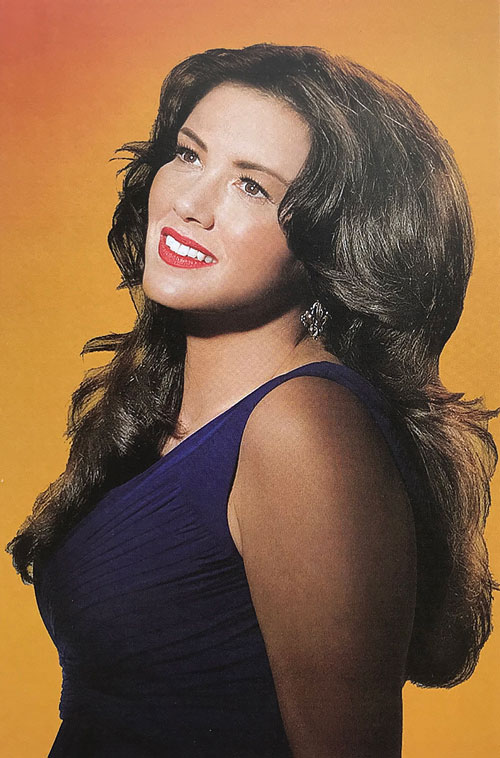 Mandy Barnett, a native of Crossville, Tennessee, started singing at five years-old.  She has been singing since.  Mandy’s style is rooted in the classic country and pop crooning of iconic singers and enduring sounds.  She delves into a song with a keen interpretative sense, studying the intricacies of its emotional content and rendering a powerful performance through her full-bodied voice.

As a teenager, Mandy starred as country music legend Patsy Cline in the stage show “Always . . . Patsy Cline” at the celebrated Ryman Auditorium in Nashville, Tennessee.  The performances sold out nightly and received rave reviews across the country.  Mandy, in role as Patsy, appears on the Decca Records cast recording.

Mandy soon signed with Asylum Records where she released her first album as herself, appropriately entitled, “Mandy Barnett.”  The album received glowing reviews in major trade publications and magazines, including “Time" magazine, as well as praise from veteran country artists and fans.

In due course, Seymour Stein, who introduced the world to Madonna, Seal, the Barenaked Ladies, and k.d. lang, heard Mandy’s voice and was, he said, “spellbound.”  When Stein launched Sire Records within Warner Music Group, Mandy was the first artist he signed.  Mandy’s Sire Records project paired her with the undisputed pioneer of the Nashville Sound, producer Owen Bradley.  The album that they made together, “I’ve Got A Right To Cry,” would be his final contribution to the community who knew him through his work with legends Ernest Tubb, Brenda Lee, Loretta Lynn, Patsy Cline, and Kitty Wells.  Owen passed away four songs into the project, but not before leaving his unmistakable mark on the album.  His brother and longtime partner, Harold Bradley, inherited the delicate task of finishing the album with Mandy.  A legal pad filled with Owen’s handwritten notes for each song guided the two through the rest of the sessions, and what was to be Owen’s farewell to the world was poised to propel Mandy and her remarkable vocal talent once again into the national limelight.

“I’ve Got A Right To Cry” was a huge critical success.  “Rolling Stone” magazine named it the top country album of 1999.  Other stellar reviews appeared in “People,” “Newsweek,” “Interview,” and multiple national newspapers.  Mandy appeared on “The Late Show with David Letterman,” “The Tonight Show with Jay Leno,” “CBS Sunday Morning,” and PBS’s “Sessions at West 54th” as a result of her acclaim.

In addition to her own albums, Mandy has been featured on movie soundtracks, including “A Walk On the Moon,” “Traveller,” “Space Cowboys,” “Election,” “Drop Dead Gorgeous,” and “Crazy.”  Mandy also sang on the SpongeBob SquarePants album “The Best Day Ever,” sharing the spotlight with the likes of Brian Wilson, Tommy Ramone, Flaco Jimenez, and NRBQ.  In 2012, Mandy’s rendition of “Have Yourself A Merry Little Christmas” was prominently showcased in “Political Animals,” the USA Network television series starring Sigourney Weaver and Ellen Burstyn.

Mandy tours regularly, nationally and internationally, and is a frequent guest on the Grand Ole Opry.  She reprised her role as “Patsy Cline” in the acclaimed production “Always . . . Patsy Cline” at the Ryman Auditorium in Nashville, Tennessee during 2009, in honor of the 15th anniversary of the celebrated venue’s extensive renovations and re-opening. Back by popular demand, Mandy again hit the Ryman stage in “Always . . . Patsy Cline” in June and July 2011.

Mandy’s “Sweet Dreams” album, released in 2011 on the Opry Music label and Warner Bros. digital, features Mandy’s renditions of songs previously recorded by Patsy Cline.  Along with Cline hits like “Crazy,” “I Fall To Pieces,” “Faded Love,” and the album title track, Mandy offers stunning versions of Irving Berlin’s pop standard “Always” and the Mel Tillis-penned “Strange.”  Reviewing “Sweet Dreams,” DigitalRodeo.com applauded Mandy’s talents as “one of the most beautiful ‘classic country’ female voices of all time.  She has total control of her voice and sings effortlessly.  Barnett is a true master of her craft.”  “Country Weekly” magazine affirmed this view, noting how Mandy embodies “the emotional torch-and-twang style of Patsy Cline with authority” with her captivating “effortless and emotional performances.”